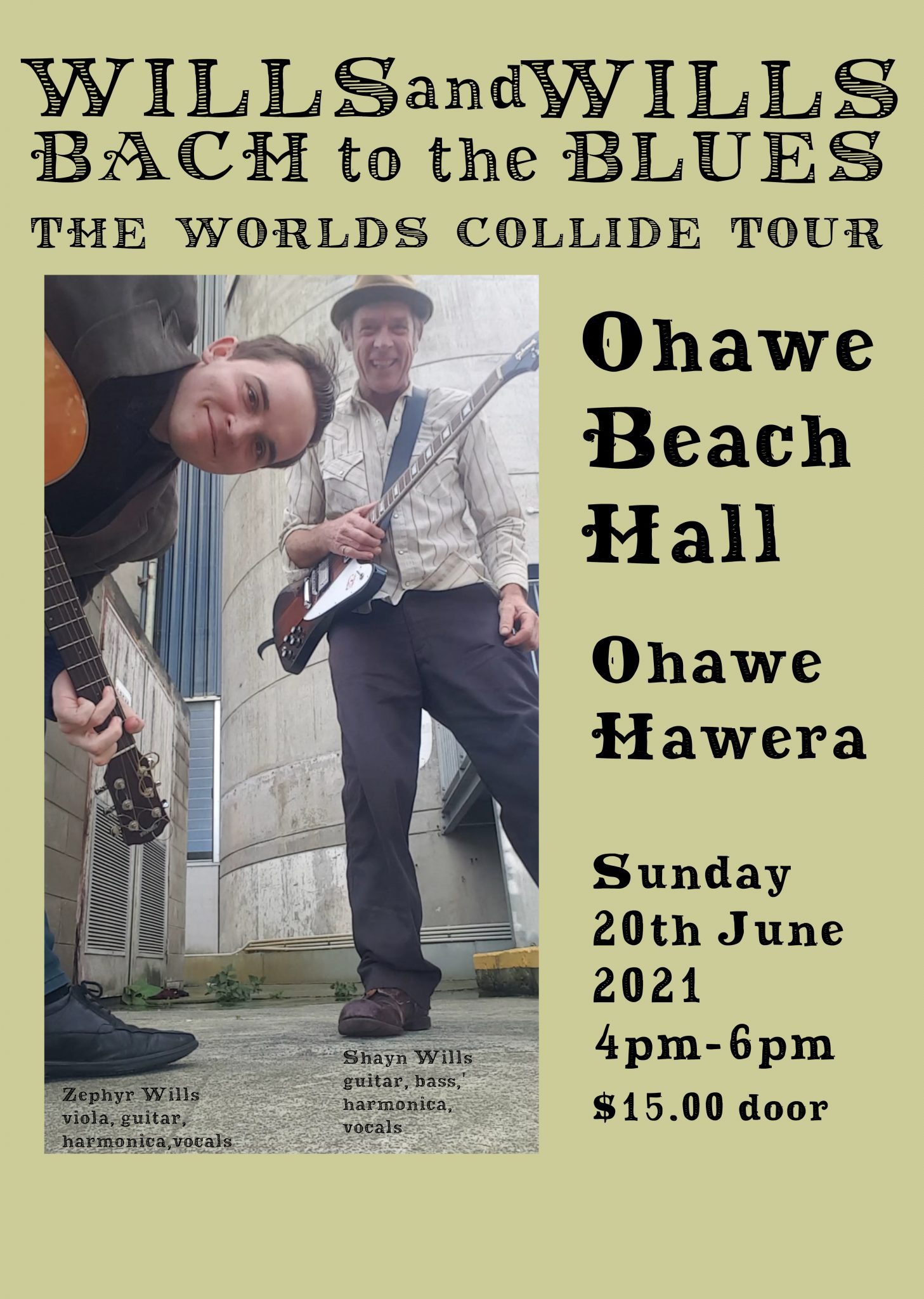 Wills & Wills, Bach to the Blues

This father and son duo will perform music from classical to originals, traditional to contemporary blues, ballads to folk, and country to Bob Dylan.

As 2021 sees Zephyr starting his honours year at Victoria University’s New Zealand School of Music, and with Shayn’s busy touring schedule, this is a rare chance to experience the connection of father and son in this unique cross generational musical collaboration.

Albert King, Junior Wells, Robert Cray, John Hammond Jnr, Canned Heat, Duke Robilard.  These names form the basis of the Blues as we know it today.  To play support for one of these musicians could be a musician’s career highlight, but to have played support for ALL of them, you have to agree that musician would be of world class standard.  Well, Shayn Wills has played support for each one of these legendary innovative musicians.

At 51 Shayn has now had 30+ years of playing, learning and living the Blues. His voice, guitar and harmonica playing have matured into something extremely special and unique.

Watching Wills play it becomes glaringly obvious he is something special.  For starters his ability to play harmonica, guitar and sing is accomplished and entertaining. (“ …the way Shayn plays guitar harmonica and sings all at the same time astounds me” Midge Marsden).  He has his own unique style of playing, it comes from a place of sincerity and heartfelt passion, and there is something about it that is distinctly New Zealand. You could easily say he has created the term “New Zealand Blues”.  His complex guitar rhythms, innovative harmonica riffs and melodic voice make him a must see act.  Julie Oakley, a reviewer for the national music magazine ‘Real Groove’ is quoted to say, “Wills is one of the original black Mississippi Blues legends, reincarnated and living in Auckland, (New Zealand)”.

Zephyr Wills is a student of classical viola under the tutelage of New Zealand String Quartet violist Gillian Ansell, at the New Zealand School of Music. Having studied violin for eight years, Zephyr switched to viola in 2017 after falling in love with its rich tones and romantic expressivity. Zephyr has received tutelage and masterclasses from musicians including Douglas Beilman, Jennifer Stumm, Ori Kam, and Robert Ashworth. He has also performed in orchestras such as National Youth Orchestra, and Orchestra Wellington. Growing up the son of a Blues musician, it would be virtually impossible NOT to pick up some guitar interests. In a ‘worlds colliding’ moment, Zephyr has finally been persuaded to put both acts together.