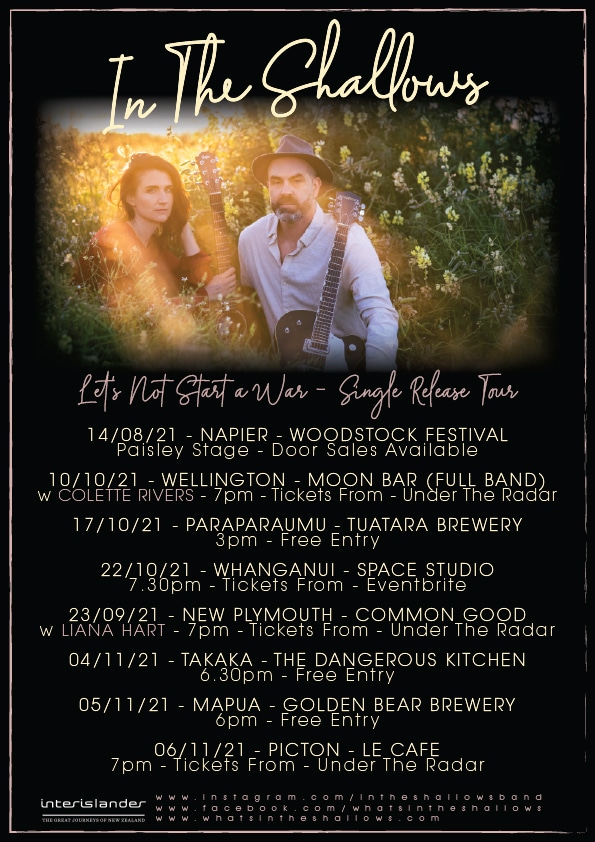 In The Shallows Return to New Plymouth at Common Good!!

This unlikely duo offer up an exquisitely silken sound that weaves together soaring harmonies, mesmerising vocals and acoustic guitars with relatable lyrics about intricate tales of love, loss, connection, redemption and empowerment. They will be doing a limited number of intimate shows this Spring in celebration of their new single release ‘Let’s not start a war’, that are not to be missed!

‘The music coming from the instruments is simply an accompaniment, it is the vocals which transport the listener, all so effortless and easy.’ – Kev Rowland – Muzicnet.co.nz

‘They’ve got some amazing songs. Their album is simply stunning and to hear two people just really capture an atmosphere, I was just entranced. It was very, very special. I felt very fortunate to be there to experience it.’ – Kev Rowland – Tracy’s prog World Podcast on Spotify.

Their 5* rated debut album produced by Steve Rokosh (Calgary, Canada and Nashville, USA) released in Nov 21, won over the ears, heart and soul of muzic.net.nz’s Kev Rowland who states ..anyone who enjoys acoustic music, performed by some wonderful singers, containing songs with a purpose yet so varied that the album never gets tiring, will find this simply essential.

Singer-songwriter Liana Hart is able to tell stories by combining intricate melodies with passionate lyrics and fingerstyle guitar. With a background in musical theatre, the songstress takes inspiration from acts such as Joni Mitchell, Stevie Nicks, and Jackson Browne, and is now known by many for her sweet country voice and heartfelt tunes.