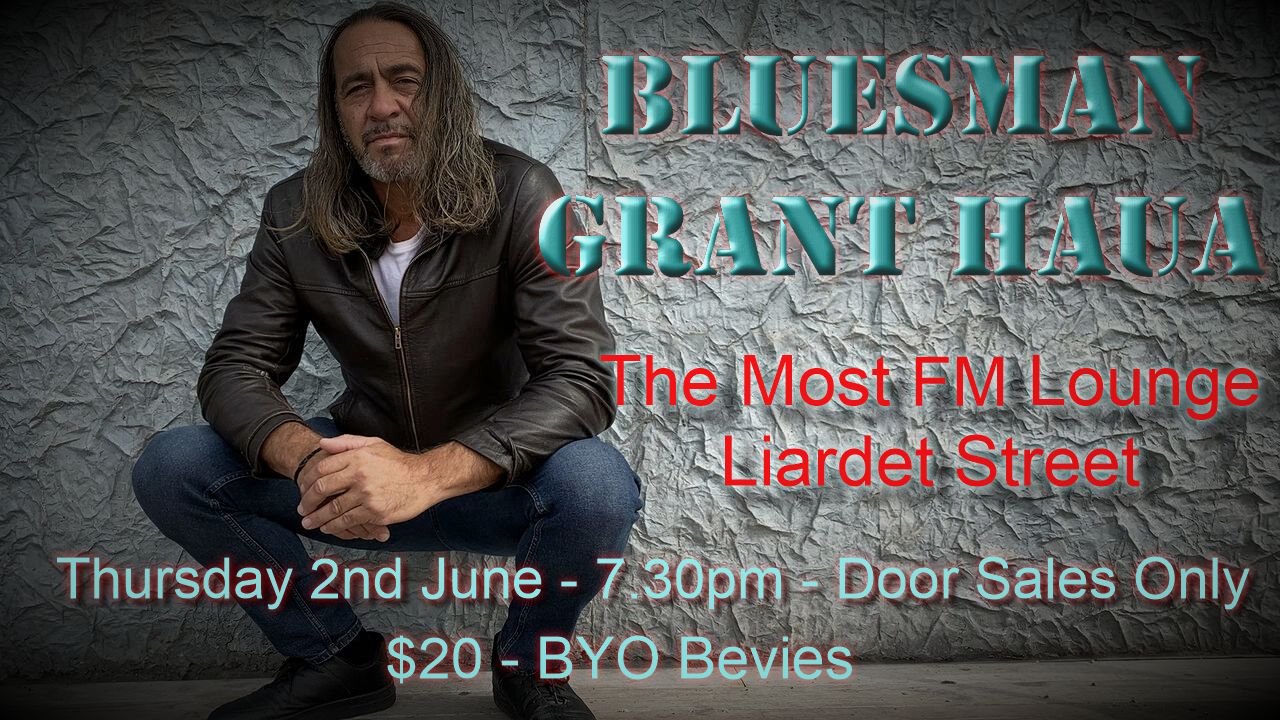 Blues At The Most FM Lounge

Grant will be playing his latest release “Awa Blues” and throwing in a few classics from his back catalogue.

Rolling Stone Album of the Week. An “old-fashioned” blues-rock record, masterful and stunning which is already rising to the level of the best songwriters of the genre. Definitely essential”.
– Philippe Langlest (Rolling Stone Magazine).

“Without revolutionising the genre “Awa Blues” brings a welcome breeze of freshness. With simple effective guitar playing, a voice to make mountains crumble, and a minimalist rhythm, Grant Haua knows how to make the powder speak with good melodies and an unstoppable sense of groove. “Awa Blues ” can only seduce”.
– Jean-Marc Petit (La Voix du Nord)

Haua is a seasoned artist who touches all kinds of points in the blues and folk from Taj Mahal and JJ Cale to dialed down Stevie Ray and even an adventurous touch of acoustic James Blood Ulmer. Seems like this is Grant Haua’s time. And deservedly so.
– Graham Reid (Elsewhere Magazine).

“Grant Haua puts two worlds together, that of his own Roots mixed with raw Blues. An excellent fusion and undoubtedly because of the authentic character of both. Awa Blues is an overwhelming record.”
– Rein van den Berg. (johnnysgarden.nl).

” At a time when the masses are flocking to ridiculous pseudo-folk tricks like Delgres, one begins to wish that genuine personalities of Grant Haua’s caliber could give the public what they deserve”.
– Patrick Dallongeville (Paris Move)

“Grant Haua seduces once again … thanks to his deep timbre, a perfectly conducted melody and a palpable emotion”
– Jazz Radio. Fr

“Between the important heritage of the style and his Maori culture which remains at the heart of his songs, the guitarist and singer presents an incredible technique and feeling and “Awa Blues” is exceptional in every way.”
– Rock N Force

To match his very impressive and quite often moving debut album Awa Blues ( released  March 2021 ) . Grant Haua who was longtime half of blues-roots stompers SWAMP THING ( with drummer Michael Barker ) . Will present in concert his deep timbred soul blues vocals/ acoustic guitars and foot percussion ( cajon/ snare )  in a performance of style that relates heavily to his maori culture which are at the heart of these songs . Grant wants the audiences at his show  to feel like they’re guests in his  home and like the songs, his  home is pretty simple but it’s warm, cozy and friendly.  So welcome. This is his  place. Awa Blues tour 2022 . Kia ora koutou

‘A seasoned artist who touches all kinds of points in the blues and folk from Taj Mahal and JJ Cale to dialled down Stevie Ray and even an adventurous touch of acoustic James Blood Ulmer. Seems like this is Grant Haua’s time’ Graham Reid (Elsewhere Magazine).